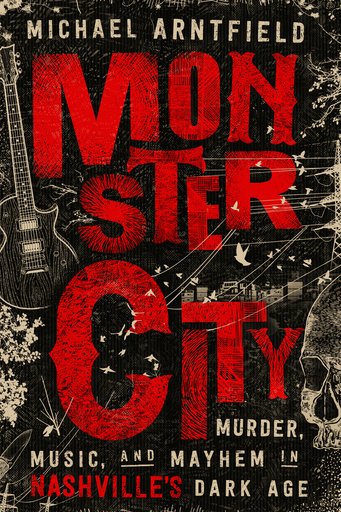 Monster City is a book by criminologist and author Michael Arntfield, PhD. It is part biography (of detective Pat Postiglione), part crime history, and part criminal psychology. with so many threads, the book has something for just about everyone.

Detective Sergeant Patrick Postiglione grew up in New York City, where he worked in his father’s heading and air conditioning business. A stint in the military left him with two goals: to see the South and to find a career in law enforcement. As part of the first ambition, he took a “vacation” to Nashville, Tennessee in January 1978 that became permanent. In 1980, he was part of the Nashville Police Academy’s last training session of 1980.

From patrolman, Postiglione quickly worked his way up to homicide detective. As a detective, he showed unusual ability and seemed particularly adept at closing serial homicides and cold cases. Arntfield follows Postiglione’s career by examining several cases he worked and solved. Many of these were years or decades old.

Arntfield organizes Monster City around six major investigations. First is the Vandyland Murders, a series of murders occurring near the campus of Vanderbilt University. Second are the Motel Murders, the murders of high-risk women in seedy motels in Nashville and elsewhere. Third are the Dive Bar murders, the random killing of an aspiring musician and his wife just arrived in Nashville trying to make it big in Music City USA. Fourth are the Tanning Bed murders at a “tanning studio” on Church Street. Fifth, the Fast Food murders. Sixth and perhaps the most challenging were the Rest Stop murders since the killer was a long-haul trucker who could be anywhere.

Although each of these investigations forms the nexus of the book’s organization, Arntfield mentions others as well. It is a very thorough picture of Nashville crime from the mid-1970s through the first decade of the twenty-first century.

Monster City held my complete attention from the first page to the last. Not only are the stories fascinating to true crime fans, Arntfield tells them with a panache that keeps his readers enthralled. I enthusiastically recommend it.

I have something of a personal connection to the book. I grew up in the Nashville area and, although most of the crimes described in the book occurred after I moved on, two did not. The murder of Sarah Des Prez occurred a block from the campus during the time I was a student at Vanderbilt, but I do not recall it. The disappearance of Marcia Trimble was another story. When the nine-year-old went missing from her Green Hills home, it was bit news locally. All three local television stations plastered her picture all over their newscasts until her body was found.

I left Nashville three years before Pat Postiglione hit the streets as a rookie cop. Therefore, I was long gone before he started making a name for himself as a homicide detective.