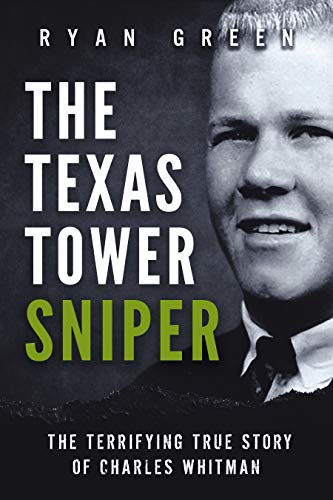 Last week, I told you about Charles Whitman. This former marine shot and killed fourteen people from the clock tower of the University of Texas’s main building. While researching that post, I discovered a book by British true crime author Ryan Green. This week, I review Green’s book, which he also titles The Texas Tower Sniper.

To briefly recap, Charles Whitman rode an elevator to the top of the University of Texas’s clock tower on August 1, 1966. He then took a footlocker of guns, ammunition, and food to the observation deck and began randomly shooting people below. By the time police finally shot and killed him, Whitman’s rampage had left fourteen people dead and many others wounded. Moreover, he had killed his mother and his wife the night before.

America was shocked. Although random mass shootings have sadly become almost commonplace, this one was the first.

Ryan Green is a true crime author who lives in Herefordshire, England. The Texas Tower Sniper is his latest book. It is a quick read. The Kindle edition weighs in at about 90 pages, depending on your font size, so it is easily digested in an evening.

Green begins with Whitman’s youth, recounting his allegedly abusive childhood, which he escaped by joining the Marine Corps. In the Marines, his exemplary conduct earned him a spot in a program that sent him to college as part of an officer training program. Poor grades forced Whitman out of the program, however, and he had to return to regular duty at Camp Lejeune in North Carolina. He was a reluctant Marine this time and his behavior was objectionable instead of exemplary.

The Texas Tower Sniper follows Whitman from disgruntled Marine to angry husband to struggling college student. By now, we know the story ends with Whitman on the tower with a rifle in his hands.

Green writes the book from Whitman’s perspective, as if he can see inside the young man’s mind. It makes for interesting reading and, I’m sure it’s based on solid research, but the technique jars the historian in me a bit.

Green is at his best in the final chapter. When an autopsy discovered a pecan-sized (some writers say walnut-sized) tumor in Whitman’s brain, some offered that as an explanation for his deadly behavior. Green lays out the case for an organic cause for the shootings and then proceeds methodically to demolish it. Whitman wasn’t out of control, he was, in fact, very tightly controlled. In the end, he concludes that Whitman had constructed an image of his perfect life. That image was really a lie that was coming apart at the seams. Unable to deal with image versus reality, he snapped.

As long as you bear in mind that what purports to be Whitman’s thoughts are mostly Green’s conclusions, I do recommend The Texas Tower Sniper. It is an easy to follow account of Whitman’s life and the tower killings. Enjoy!