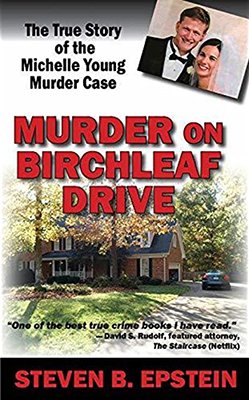 This week I review a book about domestic homicide, Steven Epstein’s Murder on Birchleaf Drive: The True Story of the Michelle Young Murder Case.  Intimate partners commit more than half (55%) of murders and most of the perpetrators by far are male.  Epstein’s 2019 book recounts one of those cases.  This book isn’t really a whodunnit; the “who” is obvious from the beginning.  The question was, would they be able to convict the S.O.B.

Michelle Fisher grew up in the town of Sayville at the southern tip of Long Island.  After high school, she decided to attend North Carolina State University in Raleigh.  There she earned a master’s degree in accounting and landed a plum job in the Raleigh office of powerhouse accounting firm Deloitte & Touche.

Celebrating her birthday in 2001, Michelle met Jason Young, a native of the North Carolina mountains, at a local bar and the two soon began dating.  They made a curious pair.  Michelle was a meticulous planner while Jason was an overaged frat boy.  When Michelle discovered she was pregnant, the couple decided to marry.

But marriage and fatherhood did little to settle Jason down.  He and Michelle argued and fought frequently.  Even a second pregnancy failed to smooth the troubled waters.  Michelle and Jason appeared to be headed for divorce.

On the afternoon of November 3, 2006, Jason called Michelle’s sister, Meredith Fisher, and cajoled her into retrieving some pages from the printer at his home.  When she got to the house, she discovered the body of her sister lying face down in a pool of blood beside her bed.  Shockingly, Michelle’s two-year-old daughter, Cassidy, emerged from under the bedcovers, explaining that Mommy “got boo boos everywhere.”

Two immense red flags are noticeable right away.  First, the brutal overkill indicated that this killing was intensely personal.  Second, killers often maneuver a third person into discovering the body, as Jason did with Meredith in this case.  Both facts pointed to Jason as the murderer and made his subsequent refusal to discuss the case with detectives even more suspicious.

Murder on Birchleaf Drive opens with the discover of Michelle’s body.  It then traces the background of the couple and the long path through their disintegrating marriage.  There is also coverage of the investigation.  Epstein devotes a significant part of the book to the trial—two trials, since the first resulted in a hung jury, not surprising since he is a veteran attorney and a partner in a North Carolina law firm.

Two things are interesting about the trials.  One is the dearth of physical evidence.  Prosecutors had to make a largely circumstantial case.  The other is Jason’s attempt to manufacture an alibi that involved sneaking out of and back into a hotel and tampering with security cameras.  It did take two trials, but a jury did convict Jason of murder in the first degree, in 2012, nearly six years after Michelle’s murder.  Judge Donald Stephens sentenced him to life without parole, saying he had “no quarrel” with the jury verdict.

The verdict and sentencing were not the end of the Jason Young story, however.  On April Fool’s Day 2014, the Court of Appeals overturned Jason’s conviction based on an obscure technicality.  The North Carolina Supreme Court reversed this decision and reinstated the conviction the following year.  Jason’s lawyers made one more attempt to have the conviction set aside, this time based on a claim of “ineffective assistance of counsel,” but this effort ultimately failed.

I liked Murder on Birchleaf Drive for its deep-dive into the backgrounds of not only Michelle and Jason but of key family members as well.  Part of the story is the long fight over first visitation with then custody of custody of the Youngs’ daughter, Cassidy, on behalf of Michelle’s mother and sister.

I did find it a bit difficult to work through the chapters on the two trials.  They present the legal cases and arguments in fine detail, as one expects from an attorney turned author, but non-lawyers may find these chapters a bit tedious.

But overall, I liked the book and readily recommend it.